The island state of Tasmania forms less than 1% of Australia’s total area and yet it has the distinction of being home to the tallest, largest and oldest trees in Australia. One may ask ‘What makes Tasmania so conducive to producing such extraordinary plant life?
First of all there is the climate. People often divide Tasmania between the drier ‘civilised’ east coast and the wetter, ‘wild’ central and western areas. Most of the iconic trees listed on this site grow in the central, southern and western parts of the state which have reliable rainfall between 1000-4000mm per annum, distributed throughout the year.

Secondly, this rainfall and the milder temperatures experienced in Australia’s most southerly state mean that catastrophic fires have been less frequent than in most parts of the hotter and drier Australian mainland. Put simply, the longer the fire interval, the longer a tree can live and the larger it can grow: There is plenty of evidence that trees of the same species in fact grow faster in the slightly warmer state of Victoria. However, the frequency of fires in the past few hundred years has meant that Victoria does not have trees of the same stature compared to Tasmania.

Thirdly, in some of the coldest and wettest parts of Tasmania, fires are virtually unknown. This has provided a refuge for a number of endemic conifers that have an ancient lineage to the super continent Gondwana. The warming and drying of the Australian continent meant these trees were forced further and further south and now they are only found in highly specialised locations in central and western parts of the state. Trees such as the Pencil Pine, Athrotaxis cupressoides, and Huon Pine Lagarostrobos franklinii grow very slowly and they also have highly rot resistant wood - so as long as they can avoid fire they can live a very long time.

So how tall, big, old do these Tasmanian trees get? The giant Eucalyptus regnans, known locally as Swamp Gum (or mountain ash if you are in Victoria) soar up to 100m tall and ancient monsters can be seen that are over 21m in girth. Furthermore, Eucalyptus globulus - Blue Gum, Eucalyptus viminalis - White gum or Manna gum, Eucalyptus delegatensis - Gum Topped Stringybark, and Eucalyptus obliqua - Stringybark, are all also known to have produced trees that exceed 85m in height with impressive girths to match. With regards to age, Huon Pines have been documented to reach ages in excess of over 3000 years. There is also a grove of genetically identical male clones of this species growing on Mt Read that is thought to be over 10,000 years old – with individual stems aged at over 2000 years.
​
There are a number of places where you can easily see giant eucalypts and these can be found by selecting a region from the regions TAB: A selection of ancient conifer photos can be found by clicking on the 'More' menu and selecting ‘Ancient Conifer’ from the drop down menu.

For the latest Tall and Big tree news from Tasmania, Victoria and all around the globe, click here ! 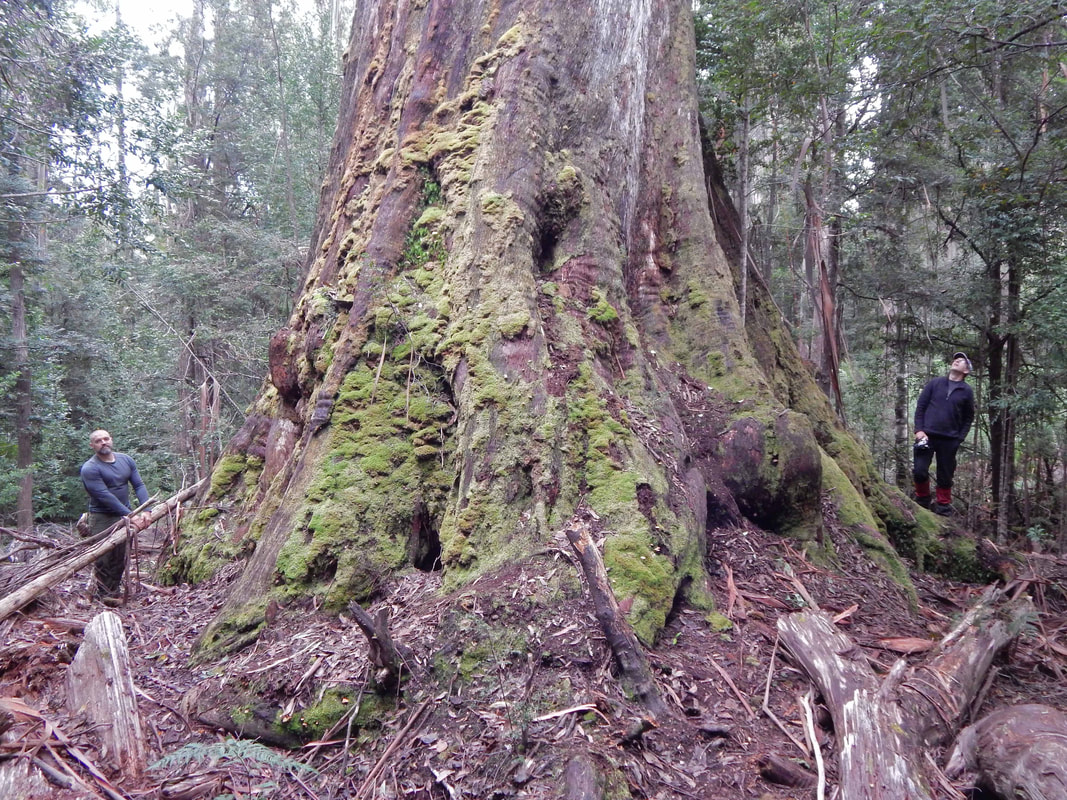 The Tasmanian bushfires that started with dry lightning strikes on January 15th, 2019 and burned for for over a month had a devastating effect on most of the 500 year old giant trees that lived in the Southern Forests, in the Arve, Picton and Huon Valley inland from the towns of Geeveston, Huonville and Dover.  Very old eucalyptus trees are particularly susceptible to fire due to their various hollows, areas of rot and the accumulated debris of centuries of fallen limbs, twigs, bark and leaves. Most of these older trees have been killed, including some that have totally collapsed into an incomprehensible mess. Some of the living trees cling to life standing on blackened stilts but are probably likely to fall when the next big wind storm hits. A lucky few have escaped with only a surface burn and could live for many years. A list of some of the assessed trees is included below, 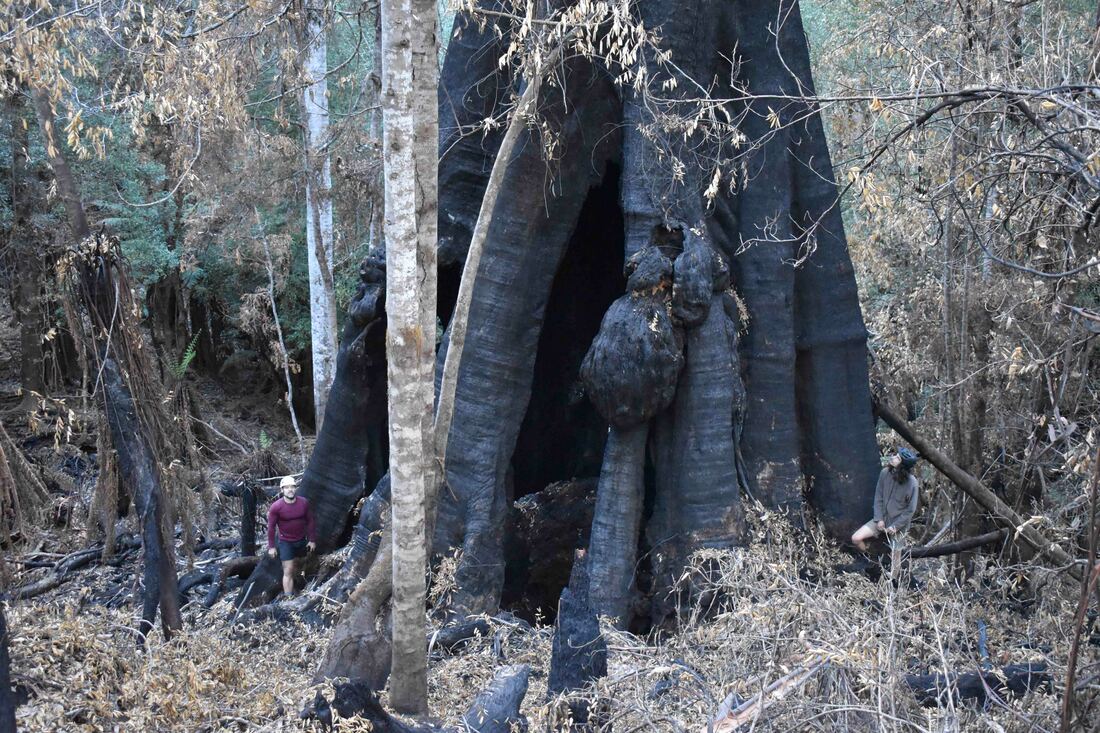 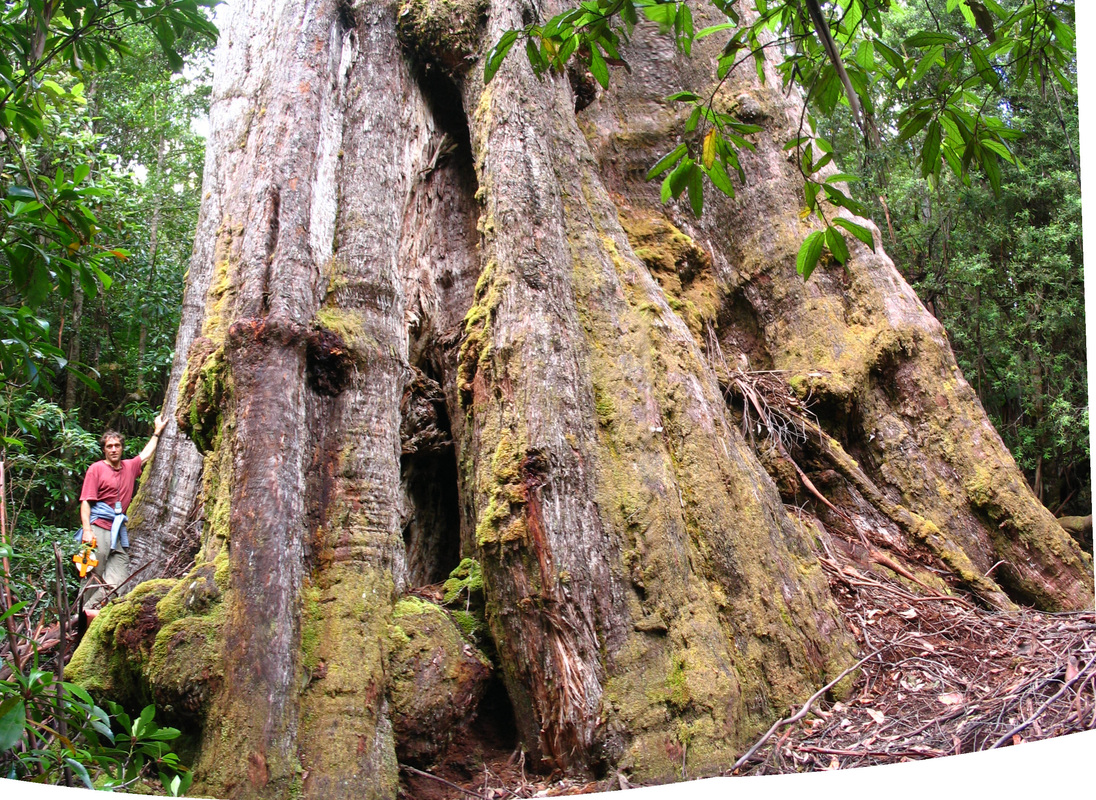 The massive fluted base of 'The Prefect' - Southern Tasmania - sadly now a pile of shattered and burnt wood
All images on this website are subject to copyright. If you'd like to use one of the photos on this website, please make contact via the links and contact TAB
Powered by